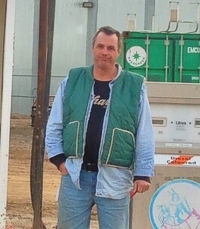 TAYLOR, Glenn Bruce - It is with great sadness that the Taylor family announces the passing of Glenn, on September 1, 2021, aged 56.

He is survived by his mother Laura, his son Andrew, Cathy McKay and grandson, Jax.

Glenn was a complicated guy. He had his demons but he was charming and was liked by everyone who knew him. His work was important to him. He was a member of a Union for over 25 years and worked hard at his job over the years. That's why I chose this particular picture. He was Santa Claus in the Downsview Christmas Parade one year. He volunteered at the soup kitchen at the church and was always ready to help anyone who needed him.

Arrangements are entrusted with Skinner and Middlebrook funeral home. A private service is planned for a later date.

He will be missed greatly.