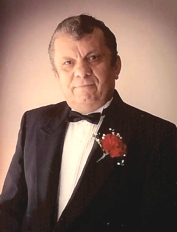 John is survived by his wife of 56 years Eugenia, his children Kathy and James, their families Chris, Rena, Justin, Tyler and his pride and joy Nicholas his grandson. He was one of six siblings and is survived by his brother George and sister Vasa.

He now joins his predeceased mother Stafilia, his father Nestor and his sister Katina, Sofia and Maria.

John was born in Niki, Florina, Greece and emigrated to Canada as a young man where he began his life. A truly proud Canadian, respective of his heritage he married the love of his life Eugenia. He was a hard worker, a great provider and loved his family and friends passionately.

His home was a revolving door that never required an invitation. He truly loved being with people, laughing having a good time and of course feeding them. Oh, how he loved to cook! He was known as the “Sandwich King” and of course the accompaniment was a root beer float!

Although he never achieved a high level of education, his wisdom and natural smarts allowed him to pursue many interests. A mathematical genius, he would draw out plans and execute renovations that only a true craftsman could master. He was an avid gardener with a green thumb like no other. His flowers were true works of art and the envy of the neighborhood

Retirement for him and his wife was an enjoyable time. They made up for much of the time that was put into providing for a young family. They were by each others side and went out all the time. They cherished the fun they could have with one another and their friends. His beloved wife Eugenia was his queen, and as such he always kept her in the highest regard like a precious flower. His compliments and admiration towards her were never-ending. She was, and still will always be, his sweetheart.

As a father, he was gentle and kind and allowed his children to blossom. He never said no. He was the man that would after 18 hours of work, still find the time to take them skating, take them to music lessons and sneak in a midnight bowl every Friday. He was a man that was engaged and involved in his children’s lives. He was their rock and their foundation and said that his greatest accomplishment was that he with his wife, raised good, caring children that he was so proud of. He was blessed with only one grandchild Nicholas.

Nicholas was the apple of his eye and since he came along at the time he had retired, would often kidnap him from daycare. He would take him to the park, arcades and fun other child play places. He never missed watching him play soccer from childhood all the way to university. The most precious of all was that he was able to see Nicholas graduate as a doctor. Although he was at the end stages of Alzheimer’s he was able to tell him how proud he was, touch his diploma and give him praise.

His last years were difficult and challenging as he has Alzheimer’s which had robbed him and his family of creating many new memories. His wish was to be home surrounded by his loved ones. Caring and loving him in the comforts of his home along with his angel and care provider, surrogate son Ivan, added to the quality of his life.

In closing, his smile was infectious and his love was a warm blanket that surrounded them. He loved and he was loved, he respected and was respected. He was an amazing husband, father, grandfather and friend.

He will always be missed and forever loved.