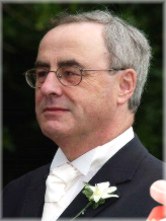 STRINGER, Chris - Died on September 12, 2021 after a long struggle with cancer.

He is survived by his wife and best friend, Geraldine (nee Tyrrell); daughter, Justine (Steven Carey); son, Jason (Michelle); his sister, Shirley Davey; grandchildren, Steven, Clio, Christopher and Jack Carey, and Jaime Hunt-Stringer, as well as numerous nieces and nephews in the UK and Canada; and by his beloved Basset Hounds, Arabella and Sebastien.

He was predeceased by his sister, Diana Linehan and parents, Reg and Margaret Stringer.

Chris was born at University College Hospital in London, England when V1’s and V2’s were still raining down on London.

In 1967 Chris was having a few beers with some St. Peter’s friends in a pub near Leicester Square when he met a Canadian girl; 18 months later Chris moved to Canada and he and Geraldine were married in St. Basil’s Church in Toronto.  They were married for 53 years.

In 1989 he was appointed Executive Vice President of Canada Trust, a position he held until TD Bank took over.  He was then asked to lead the integration of TD and Canada Trust.  He retired in 2006.

Above all, Chris was a loving human being with a great sense of humour, who adored his children and grandchildren, and small children generally, and had a great partnership with Geraldine.

Our thanks to Dr. Joseph Yuh and Dr. Urban Emmenegger, and the wonderful staff at the Odette Cancer Centre at Sunnybrook.

The family will receive friends at the Humphrey Funeral Home Toronto on Thursday, September 23rd.  Due to Covid restrictions, please email your time of attendance to Naomi at This email address is being protected from spambots. You need JavaScript enabled to view it..  A private funeral service will be held.

If you feel so inclined, please consider a donation to the Children’s Aid Foundation of Canada.