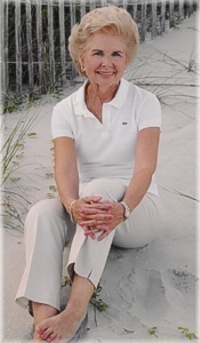 Wendy was born on July 3, 1936, in Montreal, Quebec, the only daughter of Aubrey Wentworth Quirk (Manly, Australia) and Mabel Gertrude Popplestone (Yorkshire, England).

Wendy was the adored wife of the late John Davies (deceased, 2008).

Devoted Nana to James and Olivia Lewis and Megan, Jason, Abbie and Lauren Davies. Wendy grew up in Notre-Dame-de-Grâce (N.D.G.), Montreal and attended McGill University where she earned a degree in Sociology and Economics.

It was here, during her final year, where she met the love of her life, John.

After a short courtship, Wendy and John were married on September 19, 1959. Upon graduation, John's new career with Inco took the young couple to the small mining town of Levack, Ontario. After spending a few years in Northern Ontario, and with baby Pam in tow, the family moved to Bobolink Rd. in Mississauga where they lived for over 59 years.

In 1977, the family embarked on a four-year adventure to Surrey, England to accommodate John's new responsibility for the European business of Noranda Sales. Wendy enjoyed a rich life of service to her community and her church.

Active to the end, when she wasn't serving her community, she could be found at the Ontario Racquet Club (where she and John were founding members) playing tennis. She was never happier than when she was hosting meetings, pursuing causes important to Mississauga, enjoying the home that she and John built and adored, or spending time with friends, her children, and her grandchildren.

Friends may call at the Turner & Porter Peel Chapel, 2180 Hurontario St. for visitation.  Due to the restrictions still in place surrounding COVID-19, attendance at the visitation is limited. Registration is required to attend.

If desired, donations to the Rattray Marsh Foundation or the Church of St. Bride's would be appreciated by the family.