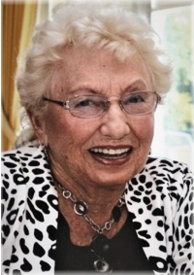 PLATT, Thelma A. Alice (nee Bain)   - of Victoria Place in Bobcaygeon, passed away peacefully, on September 17, 2021, at her beloved home of 40 years, with her son by her side.

Thelma received her Victoria Order of nursing degree from Women's College Hospital in the mid-1940's and practiced as a registered nurse in Toronto and Mississauga.

On July 15, 1949, Thelma married John Cleveland Platt of Toronto. They raised two daughters, Diane and Nancy, and one son, Wayne. They lived in Mississauga for 20 years before relocating to Bobcaygeon for retirement.

Thelma enjoyed learning and challenging herself.

Thelma was predeceased by her parents, her brother, Donald Bain (Halifax) and husband John (2002).

Thelma is survived by her sister Joan and brother-in-law George Reynolds of Thornhill and many nieces and nephews and their families.

She is also survived by her three children, Diane (Quesnel, BC), Nancy (Toronto), and Wayne (Brampton).

She will be missed by her grandchildren, Kyle, Keeley and Clayton (all of BC) and four great-grandchildren, Malcolm, Beckham, Ayla and her latest, Wyn.

Thelma was our matriarch; a proper lady who will be remembered for her love of family and sense of humour.

She led a good life and was known to impart important life lessons to those close to her (like it or not, lol). We are thankful for many cherished memories of our Mom, Nanny, Big Nanny, aunt, sister, sister-in-law, or just, Thelma. The family is most appreciative of the care and kindness provided by her dedicated personal support worker, Joy.

At Thelma's request, there will be no funeral service.

As expression of sympathy, donations to the Humane Society can be made.