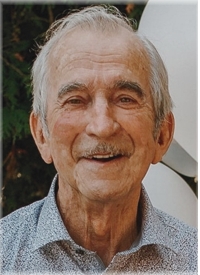 It is with great sadness that the family of Jim Scherrer announces his passing on Wednesday, September 22, 2021 at Grand River Hospital after suffering complications from a stroke.

Great-grandfather to Weston and Wyatt McKee, Emerson, Alina and Waylon McKee, Jack, Audrey and Gwen McKee, Nichola and Grant Hedrich, Lily and Claire Schott, Elodie and Coco Lamb, and Benjamin and Holden Hipkiss. Jim is survived by his sister, Betty (Herb) Wendling, and his sisters-in-law, Marilyn Scherrer and Sally Scherrer. He was predeceased by his parents, Clara (Stroeder) and Fernie Scherrer, his brothers Bill Scherrer and Joe Scherrer, and his son-in-law, Nick Hedrich. Jim was a visionary, a planner and a builder.

After he and Gertie married in 1951, they bought an acre of land in Macton between the Walter farm and St. Joseph's Roman Catholic Church and he designed and built a house there for his young family.

In 1965, Jim became one of the founding partners of B & L Metal Products in Elmira and moved his family there in 1967. In the early 70s, Jim and Gertie bought a small cottage at Lakelet, and in the 90s, he designed and built a larger lakefront home to accommodate the growing family.

One of the accomplishments that Jim was most proud of was his work as Chair of the building committee for the new St. Teresa of Avila RC Church on Flamingo Drive in Elmira, a project which was completed in 1992 under his inspired leadership.

In 2001, on the 150th anniversary of St. Teresa, Jim was recognized as a 'Pillar of our Parish.' Dad had a wide variety of passions and interests.

His grandchildren have fond memories of 'Papa' teaching them to fish for bass, and telling them to 'cast out of the right side of the boat.'

He loved to have visitors, and during the pandemic, his garage became his outdoor living room, where we could safely socially distance.

Sadly, his stories have all been told. May he rest in peace with Gertie.

The family wishes to thank Dr. Merchant and the nurses on 5N at GRH. We are grateful to his neighbors and friends who kept him company and kept in touch, especially in the past few years. A Funeral Mass will be held at St. Teresa of Avila RC Church on Saturday, September 25th at 1:30 p.m. with Father Peter Meyer officiating. There will be a visitation at the church thirty minutes prior to the service.

Due to Covid restrictions, a limited number of people will be permitted in the church. Please call the Dreisinger Funeral Home for a reservation to attend the visitation and/or the Mass.   A private family interment will take place at a later date in Macton.

Memorial donations to St. Teresa RC Church would be appreciated by the family.