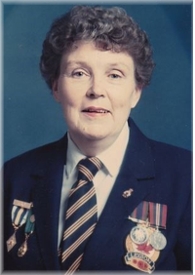 Passed away at Victoria Hospital, London, in her 96th year, after a long battle with Alzheimer's disease.

Predeceased by her husband of 44 years, Meredith (Murray) Wall, and siblings Marguerite Walsh of Toronto, Grace Street of Kingston and Dr. Richard Street of Blyth.

She served proudly in the Canadian Women's Army Corps from 1944-46 and as Secretary of the Royal Canadian Legion District 'D' (Toronto) from 1969 to 1992.

A stalwart member of Wanstead United Church in Scarborough for 54 years, her bright smile and wonderful sense of humour will be sadly missed by all who knew her. Evelyn never met a cat she didn't like.

Her radio was glued to Classical 96.

And while Alzheimer's could take speech and memory from her, it could not take her love.

The family extends heartfelt thanks to the staff of the Dearness Home in London for their attentive care over the past 7 years.