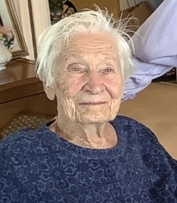 KROCHAK, Katherine 'Kae' (nee Stasuik) - Passed away peacefully, with family by her side, at Highview Residences in Kitchener, on Sunday, October 10, 2021, at the age of 100. Former resident of Etobicoke.

Survived by her siblings, Nick and Sylvia. Kae is now reunited with her parents, Nicholas and Paulina, and her siblings, Anne, Mary. Nellie, Paul, George, Patricia and Minnie. She will be fondly remembered by her nieces, nephews, family and friends.

The family would like to thank the staff at Highview Residences for their care and compassion during her stay.

As expressions of sympathy, donations to St Demetrius Ukrainian Catholic Church or the Ukrainian Canadian Care Centre would be greatly appreciated by the family.

Kae, as she was fondly known by family and friends, grew up as one of 10 children in rural Saskatchewan. She began her teaching career immediately following graduation from Sacred Heart Academy in Yorkton. Although she and Joe met in high school, it was not until a few years later after he had enlisted in the Air Force during WWII that their real relationship began. They were married after the war, and as they say, the rest is history.

When Joe's career took him to Toronto, she left family and life as she knew it to begin again in the big city where they raised their three children and lived for their entire married life, except for 3 brief years in Montreal. Together they were founding and active members of St. Demetrius Ukrainian Catholic Church.

Kae retired from teaching in 1968 and surprised everyone by developing her until then hidden talent. in oil painting. In addition to family and friends, she and Joe enjoyed golf, bridge, and world travel but Kae was always happiest when Joe was at her side.

Many regarded Kae as a woman of class and kindness, and for this, as well as many other reasons too numerous to mention, she will be fondly remembered and dearly missed.