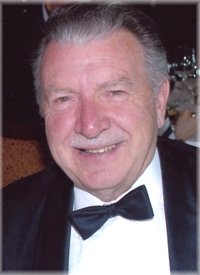 Our father was born on October 2, 1929, as he kicked off the Great Depression.

He was married for 68 years to his bride: Ruth nee Callaway and after one year, are reunited.

Much loved Grampie of Jennifer, Adam, Emily, Alasdair and Andrew Gordon; James and John McCracken; and Alex and Connor Gordon. Great-grandfather to 8.

Also survived by his brother Al (Joanne) and sister-in-law Elaine Gordon. Jim was born in East York. He enjoyed a very long and successful career in the Insurance business which began in Toronto and took him to Ottawa, London, and Toronto again before purchasing his own business in Cobourg. J.F. McCullough Insurance soon came to be known as James W. Gordon Insurance Brokers.

It would later become a family affair, when Mark, Brian, Jamie, James and Alex would all play their part in its success. Big Jim to many, he had a gregarious personality, loved to sing... if only the first line of any song, and was an avid lawn bowler and bridge player.

Past President of the Cobourg Rotary Club, he was a member for over 50 years. Mum and Dad loved to travel, spent decades of winters in New Smyrna Beach with wonderful friends and travelled all over the world.

His was a long life well lived. His first ever hospital stay was earlier this year and he was so very grateful for the wonderful care that he received at The Northumberland Hills Hospital. We would be grateful for donations to this facility in his memory. Thank you to Dr Emma Smith and your colleagues for your wonderfully compassionate care.

A private service will be held at MacCoubrey Funeral Home, Monday, October 18th.