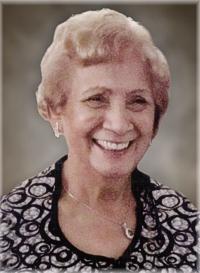 It is with heavy hearts we announce the passing of Rita Dubeau, who died peacefully on October 19, 2021 at 91 years of age.

Rita, mom or Nan, Nanny, Grandma, and Même, as she was known by her legion of grandkids, lived a life devoted to her family, who she loved with all her heart.

Born in Montreal on November 2, 1929 as Rita Lize-Hum, she moved to Toronto at twelve years of age.

As a teenager, Rita began work at St. Michael's Hospital, where she met, fell in love with, and married Lorne Dubeau, despite an engagement ring out of a cracker jack box.

Married on September 14, 1946, they spent a lifetime together; they were married for seventy-four years, having nine children, losing two babies and raising seven.

A dedicated mother, adoring grandmother, proud matriarch, and loyal friend, Rita touched the lives of everybody she encountered.

Rita joins her Lorne and her daughter Carol, who passed away earlier this year, along with Jacqueline and Ricky, in eternal rest.

Her smile and laughter will be missed by all that knew her.