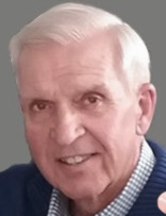 LOUGHEED, Robert Raymond 'Bob' - It is with great sadness that we announce the death of Bob on October 19, 2021 after a valiant battle with cancer.

Bob passed away at home, where he wanted to be, with his loving wife Jane (Weatherbie) by his side.

Bob will be dearly missed by his step-mother, Bernice Lougheed, his brother, Doug Lougheed (Bernadette) and his sister Linda Stanczak (Ray).

He has left a big hole in the hearts of his extended family of in-laws, Matt and Susan Weatherbie, Betty Tieche and Ron Cuthbert and Julie Peacock and Scott McNabb.

Bob grew up in Barrie Ontario and he graduated from the University of Guelph, and he and his classmates (OAC-68) have remained friends through the years, many of whom still gather annually for golf and/or a barbecue.

Bob was a happy man who had a life well lived. He will be remembered for his warmth and wicked sense of humour by his family and friends and anyone who was lucky enough to spend time with him.

Heartfelt thanks to the Temmy Latner Centre for Palliative Care, for their compassionate attention over the last several months, which enabled Bob to remain at home. Special thanks for the caring hearts of Ramya and Temi who helped Bob so much.

Due to COVID, there will be a private family service for Bob. We look forward to an opportunity to celebrate Bob’s life with his many friends at a later date.

In lieu of flowers, please consider a donation to a charitable organization that had meaning to Bob, such as Prostate Cancer Canada, The Royal Conservatory of Music or The University of Guelph.