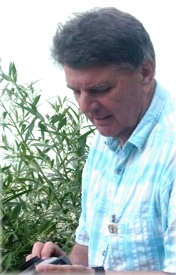 He will be fondly remembered by his wife Dominique, his daughter Nathalie (Peter) and his infant grandson Matteo.

Heinz was born in Germany and kept close ties with his sister Rita (Peter), his niece Kerstin and her family.

When he was 22 years old, he moved to Paris and met his future wife.

While there, he met his best friend Frank, who convinced him to eventually move, in 1972, to greener pastures and the wild North, Canada.

When in Canada, Heinz found success as a Real Estate Broker and fostered many friendships along the way. Throughout his lifetime, Heinz enjoyed travelling and nature.

Later in life, he developed a passion for hiking, especially along the Bruce Trail with his ever faithful group and family. Heinz will always be remembered for his quick wit, his sharp sense of humour and his deep sense of integrity.

He enjoyed the simple things in life, whether it be eating a baguette with cheese and wine or sitting on his deck watching wildlife. He made a huge impact to those he knew and leaves a void.

For those wanting to make a contribution, we kindly ask, upon Heinz's wish, to make a donation to the Bruce Trail Conservancy.