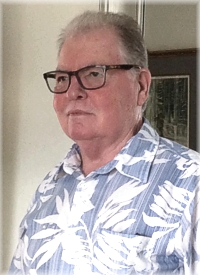 McGRATH, Michael   - Mike passed away peacefully at The Bridge Hospice, Warkworth on October 10th, 2021 of PRES at the age of 68.

Mike was a loving, kind, generous husband, father and friend.

He was the beloved husband of Pip (nee Mason).

Beloved son of the late Thomas and Edith, Son-in-law of Lorne Mason, the late Norma.

Mike was born in Toronto.

He was one of seven siblings.

His family moved from Toronto to West Hill when he was a boy where he and his brother Greg attended the newly opened Peter Secor Public School.

Mike loved sports and participated in hockey and baseball proudly representing his school.

He played Northern Junior A Hockey for the North Bay Trappers.

Mike obtained his B.A. from York University. He enjoyed a 32-year-career as senior claims adjudicator with the WSIB in Toronto.

What Mike loved most was spending time with his family.

He will be missed by his grandchildren, Keira, Kate, Savanah and Colton.

He waited with great anticipation for the birth in December of his grandson Raiden (Fin) but we know he will be with us in spirit, watching from above.

Rest In Peace my Grade 6 friend.

Condolences from family and friends may be sent to  .

Our thanks to the staff at Campbellford Memorial Hospital, Kingston General Hospital and The Bridge Hospice, Warkworth for helping to provide the highest quality of life for Mike to complete his journey.

Donations may be made to The Bridge Hospice, Warkworth, 137 Old Hastings Road, Warkworth, Ontario K0K 3K0.

Until we meet again.