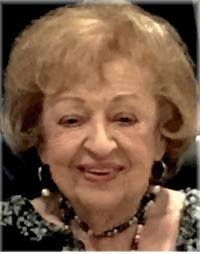 Treasured sister-in-law and sister of Claire and the late Eli Pont and predeceased by her other dear siblings and their spouses, Gertie and Sam Meltzer, Sarah and Lou Wolman, Ida and Harold Rosen, Bernard and Rena Pont.

Loving aunt to her many nieces and nephews, who always kept in touch. Stella will be sadly missed by her family and many good friends.

Donations in Stella's memory may be made to the "Stella and Myer Weinstein Fund in memory of Paula Sharon Weinstein" c/o the Montreal Children's Hospital Foundation 1-514-934-4846 1-866-934-4846 www.childrenfoundation.com or to the charity of your choice.  Arrangements with Paperman & Sons.