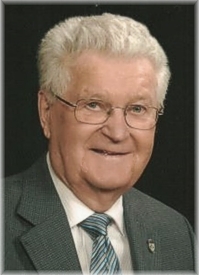 We are deeply saddened to announce the passing of our beloved father, Jack Muszynski, in his 97th year.

Jack was born in Poland and immigrated to Canada with his mother at the age of 2-1/2 (his father was already in Canada and working in Toronto).

At the tender age of 18, Jack joined the Canadian Navy and was stationed in Montreal, Cornwallis, Nova Scotia and St. John's Newfoundland, before boarding his first ship and venturing to sea where he became Stoker 1st Class.

His career in the Navy terminated on a mine sweeper after the war was over in 1945. His working career in Toronto consisted of a hardwood flooring business; retail shoe store business; construction business building houses and several apartment buildings; and industrial/ commercial real estate business.

He will be greatly missed by his family and many friends.

Funeral services will be held at a later date in Toronto where he will be laid to rest with his parents.

Memorial donation to Kincardine Hospital Foundation would be appreciated as an expression of sympathy.