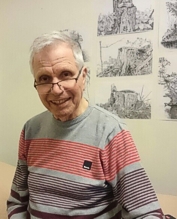 ILES, Terrance 'Terry' - On December 5, 2021, in his 86th year, after a very long struggle with dementia, Terry died at Kensington Gardens in Toronto with all of his family by his side.

Cherished husband, wonderful friend and partner of Susan, dear Dad to Erin and Gillian, father-in-law of Subrata Bhattacharjee and Matthew Schofield, and loving grandfather of Maya.

A creative, self-made man, born in Toronto, raised in Kitchener and Guelph with his parents Edna and Ivor, Terry moved to Toronto to attend the Ontario College of Art where he studied Illustration and Design. He put himself through school by delivering groceries and beer and working in the summer as a lifeguard at all of the Toronto beaches.

He began his impressive career in advertising with Goodis, Goldberg, Soren where Terry’s talent as an Art Director was quickly recognized. He was thus sought after and, throughout his long career, worked at many of the top creative agencies in the city.

Terry developed many successful, well known campaigns for which he received over 100 awards and certificates of recognition, including a Clio Award in the US, a Cannes Lion for outstanding global advertising, and, in 1992, the Les Usherwood Award, recognizing lifetime achievement.

His dedication to the craft led him to perhaps his most fulfilling position, teaching ‘Creative Concepts’ for 25 years to fourth year students at OCAD. Terry was an exceptionally dedicated teacher who positively influenced so many students.

Terry spent many happy hours reading, daydreaming while supposedly fishing, birdwatching and sketching nature while at his cottage in the Kawarthas. His accepting nature, his sense of humanity, and his generous spirit will be missed by us all.

No flowers please. If friends wish, a donation in Terry’s memory to Kensington Gardens at www.kensingtonhealth.org or a Food Bank of your choice would be very much appreciated.