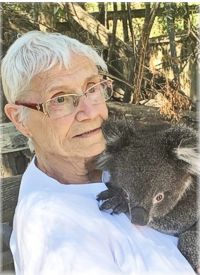 Her last fight was mercifully short as she succumbed to heart disease and kidney failure.

She is survived by her son John, her daughter-in-law Maria, and her grandchildren Emma and Tristan.

Kathleen was born in Aberdeen, Scotland, and her spirit was forged during WWII and the rebuilding that followed.

In the 60's, she imported her young family to Toronto, making her life here.

Unlike many women of her era, Kathleen was a lifetime employee for Warner Lambert.

While working there, she acquired a computer science degree and became one of the pioneers that computerised that company.

She then moved onto brand management, cutting a very elegant and smart figure that was cherished and respected by her multitude of colleagues and friends.

In retirement, she threw herself into her grandchildren.

She and her husband Alistair, who predeceased her, were a very large part of bringing them up and insisted on paying for their higher education.

No loonies or toonies were ever spent in the Fowler household as they were all saved for the grandkids, and once the people at the cafeteria at Warner Lambert found out about this - their change from any bill, be it 20 or 50 was always in coins.

Once Kathleen moved to Gates of Bayview, she quickly became an integral part of the community.

Since her passing, the tributes from all the people whose souls Kathleen touched and the stories that they've shared only prove how much she meant to them all. We will all miss her dearly.

As per her wishes, cremation has already taken place.

When circumstances permit, we hope that all the people that loved her as we do will join us in holding a celebration of her life.

In lieu of flowers, since you can't donate to Kathleen's favourite charity (her grandchildren), please donate to your charity of choice.