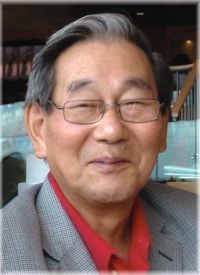 Born on January 9, 1932 in Vancouver, BC, he was determined to reach his 90th birthday before he left to rejoin his beloved wife, Yoneko (Edith), who predeceased him by three months.

He was the youngest of six, and was predeceased by siblings, Dick, Ray, Terry, Shogo and Florence.

In his youth, he was considered a standout football player and a very fast runner. Highlights of his vast career include working for AVRO, De Havilland Aircraft, Spar Aerospace and The Mandarin Restaurant where "Mr. T" continued to work until almost the age of 87!

In his spare time, he enjoyed fishing, bowling and in later years, golfing.

He was very involved with Brampton Minor hockey and volunteered as Convenor for approximately ten years.

A private family service will be held on Sunday, January 23, 2022 at 1 p.m. at the Brampton Funeral Home, and we invite friends to join us virtually.

At a later date, a celebration of life will be arranged when we can all come together safely, with great food and funny stories, just as he would have liked.

In lieu of flowers, we request donations to Diabetes Canada, Parkinson Canada or a charity of your choice.