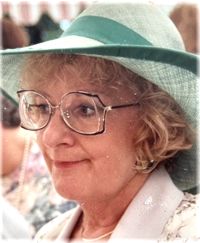 It is with profound sadness that we announce the passing of our beloved Jan, after a short illness, at Bridgepoint Hospital in Toronto.

She was in her ninetieth year. Jan was born and raised in Kirkland Lake, Ontario, the oldest of six children (all girls) of Lucy and Roland Bourgeault.

Her high school years were spent in St. Mary's convent school where she was given a firm grounding in music, and excelled in piano.

In 1959 she married David Brown and they began their life together in Etobicoke, he pursuing his career as an English teacher, she as a piano teacher.

For the next fifty years she gave the gift of music to countless children and some adults during their 62 year marriage.

Jan and Dave had four children: Chuck (Giselle), Jennifer (Bryant), Stephen (Wilhelmina), and Jonathan (Sinéad). She is also survived by nine grandchildren and her two remaining sisters, Theresa and Veronica.

Jonathan, the youngest, attended St. Michael's Choir School where he developed his musical abilities in piano, organ and voice.

She was an extraordinary woman.

Cremation and a private family funeral have taken place. A celebration of Jan's life will take place at a later date.