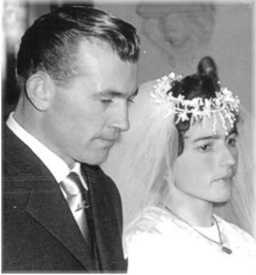 ANDRIGHETTI, Luigi and Corona  -  Once upon a time, in Fonzaso, a little village in the mountains of Northern Italy, there lived a handsome boy and a beautiful girl.

They fell in love and were married on the snowy morning of January 23, 1960.

So began their life together: a life which would bring them to Toronto, Canada, three daughters Lucia, Angela and Florence, two sons-in-law, Jordy and Stephen and two sweet grandsons William and Lucas.

Together with Luigi's brothers and their families they made Canada their home.

Luigi found success as a hoisting engineer, even having operated the largest crane that excavated the ground for the Skydome.

Corona became the most caring and knowledgeable nurse, while sewing and cooking delicious meals.

Luigi and Corona kept their Catholic faith intact, only allowing insurmountable tragedies to keep them from weekly mass.

The worst to befall them was in 2020 when they watched their beloved Lucia lose her brave battle with cancer.

Happily married for 62 years, they experienced their first separation when both were hospitalized in January of this year.

After enduring three difficult months apart, Luigi and Corona were reunited by the angels at the Dorothy Ley Hospice in Etobicoke, Ontario.

Luigi entered Heaven only hours later and Corona joined him on April 23, 2022.

They are survived by Luigi's siblings Giovanni (Luciana), Angelo, Sergio (Secondina) and Corona's sister Meri and sisters-in-law Maria and Regina along with many loving nieces and nephews.

We would like to extend our heartfelt gratitude to the health care staff at Dorothy Ley Hospice for their compassion and care of our parents.

In honor of Luigi and Corona, please consider a donation to the hospice, in lieu of flowers.