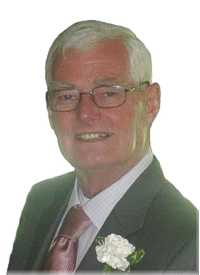 Bill was predeceased by his parents, Russell Spanton and Hilda Knapton, brother Fred, and sister Pat.

He is survived by his younger brother, Russell. Bill and Roslyn met when they were 18, and married three years later.

The next year son Tom arrived, and was followed by daughters Linda, Sandy and Carrie.

Bill grew up in Leaside, and later started his own business there.

All the Spantons loved the summers; spending time at the cottage on Lake Scugog, with Dad driving the boat and all the kids lined up on the dock, awaiting their turn to ski.

Bill, you were so loved and will be very missed by your wife, four children, ten grandchildren and nine great-grandchildren.

Many thanks to the staff at Harmony Hills for the care and kindness they showed Bill and his family.

If desired, donations to the Alzheimer Society of Toronto would be appreciated.