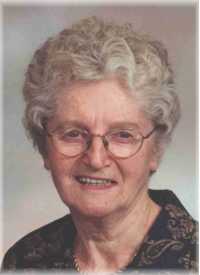 Passed away suddenly, but peacefully, in her sleep in her apartment in Toronto, at age 97.

She had a rich life despite growing up during the Great Depression and the Second World War. She remembered her first car ride in the late 1920s, when automobiles were a new means of transportation.

She was predeceased by her husband, Gerhard Klassen.

She leaves behind her sons, Wolf Klassen (Sandra Sagara) and Thomas Klassen (Sue Han); and her grandchildren, Sarah, David, Claire and Alexander.

Her sons and her grandchildren were the most important things in her life.

For four decades she lived in the St. Clair O'Connor Community, an intergenerational Christian housing complex, and was longtime member of the Toronto United Mennonite Church.

She was a tireless volunteer, especially once she retired from her position in the accounting department of Hudson's Bay. Well into her 90s, she contributed to the gardens, the Tea Room, the gift shop, bake sales and other activities and events.

Never one to shy away from taking on a task, or from expressing her views, she will be most missed for the positive way she approached life.

A private family service will be held.

In lieu of flowers, donations can be made to the St. Clair O'Connor Community at https://www.canadahelps.org/en/charities/st-clair-oconnor-community-foundation/.