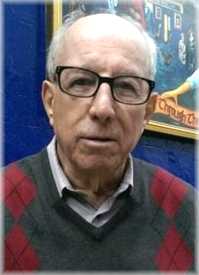 The foundations of Séan's life were his family, his work, sport and his Irish culture and community.

He and Pat were devoted to one another for their 67-year marriage.

Séan and Pat helped to establish the Irish Emigrant Aid & Benevolence Society in the 1960s, which evolved into the Irish Canadian Cultural Society.

In retirement, Séan remained active in the Irish Canadian community and travelled with Patricia, going back home to Ireland and Cheltenham to spend time with his siblings and wider family. He was a beloved grandpa and papa to his 15 grandchildren: Kathleen, Brian, Sarah, Siobhán, Maggie, Clare, Conor, Séamus, Ciaron, Shelagh, Maeve, Sinéad, Pearse, Séan and Grace. His endless love for and pride in his grandchildren was apparent to anyone who saw them together, and was truly felt by each of them.

We express profound gratitude from our family to everyone at Sunrise who cared for our father with tenderness and respect, and continue to provide Patricia with the loving care Séan provided to Pat himself, until very recently.

Yonette, Alex, Sonia, Maria, and Azra treated Séan as though he was their own. Séan emulated kindness and generosity in the way he lived his life and raised his family. We are privileged to call him our father. We will continue on with love and gratitude for the person that he was in the immense shadow he leaves.