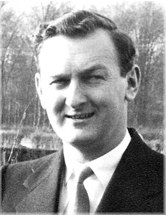 Michael and Mary relocated to Scarborough, where they lived for the rest of his life. Michael moved on to a number of personnel manager positions, finally retiring from ECKO Canada in 1991.

Amongst his passions were soccer, football, auto racing and military history. Michael could never stand next to a stranger for long without striking up a conversation.

Michael was always a child at heart. He often said that he could survive on English chocolate and ice cream. He loved to laugh and when something amused him he repeated it. He will never be forgotten by those lucky enough to have met him.

Thank you to the staff at The Scarborough Hospital for their excellent care in his last days.

Michael's life will be celebrated with friends and family at the family home later this year.