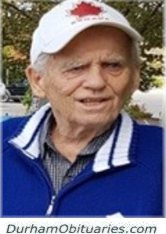 HENEBURY, Leo  - It is with great sadness that the family of Leo Henebury of Whitby, Ontario announce his peaceful passing at Lakeridge Health Oshawa on Saturday, December 15, 2018 at the age of 87.

Leo will be dearly missed by his wife of 58 years Irene, and his children Doug (Shelley), Tracy (Frank), Scott (Joanne) and his beloved grandchildren Lisa (Jason), Zachary, Adam, Michael, Joshua and soon to be first great-grandchild (due January 2019).

Leo is predeceased by his parents Pierce & Theresa, brothers Patrick, Clyde, Frank and William and his sisters Annie, Susie and Edna.

Leo was born in Point May, Newfoundland and relocated to Scarborough, Ontario where he met his wife Irene and raised their three children.

After he retired from Supreme Aluminum Industries in Scarborough, he spent his time at the cottage he built in Burks Falls, Ontario as well as fishing and cheering for his Toronto Maple Leafs.

He will forever be remembered for his sense of humour, love of family and his easy, outgoing demeanour.

At his request, a private family memorial will take place.

In lieu of flowers, donations to the Alzheimer Society of Ontario would be appreciated.