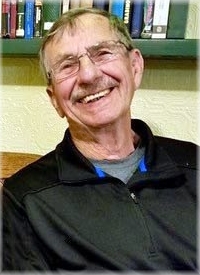 Of Oshawa, peacefully passed away at Lakeridge Hospital on Tuesday, October 19th, 2021.

Jack is survived by his wife Shirley, his son Greig (Cheryl) of Carlisle and his daughter Jan (Roger) of Ohio.

He was predeceased by his daughter Karen Skobel (Walt) of Toronto and sister Helen Vincent.

He was the proud grandfather of Maddie Skobel, Geoff and Karly Findley and Christopher and Kellen Posacki.

He will be missed by his many nieces, nephews and friends including Jennifer Wilson (Hinch) who is considered to be part of the family.

“Jack” (John) Christopher was born in Toronto on July 26th, 1933. He met and married Shirley and together they shared over 65 years of laughter and adventures.

Jack began his career working on the famed Avro Arrow, and then went back to school to pursue his passion of history, becoming a high school teacher in Courtice.

A spirited over-achiever, Jack loved all sports. He refereed hockey, coached football and bicycled across Canada the year he retired from teaching. He also cycled 85km on his 85th birthday and was a 80+ Hall of Fame participant in Ottawa for those playing hockey into their 80s.

His greatest joy, though, was the time spent with his family — camping, skiing, (snowboarding at 65), decorating for Hallowe’en, and encouraging all the grandkids to join him on each adventure.  He loved the outdoors and nature, and some of his happiest times were when everyone was together at Jack and Shirley’s place in Clarksburg — the more, the merrier.

When not pursuing outdoor hobbies, Jack was busy following his Toronto sports teams, especially the Blue Jays. Also not a day went by when he didn’t complete the daily crossword or beat everyone at Jeopardy.

We will miss your wit and wisdom.

As per Jack’s wishes, a private family ceremony will be held at the top of Epping Hill near Collingwood.