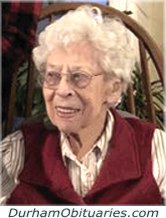 RIORDAN, Margaret “Peggy” Rita (née Heffer)  - Peacefully in Ottawa on Friday March 16th, 2018, Peggy was in her 95th year and spent all but her final few months as a resident of Oshawa.

Donations in memory of Peggy can be made through McINTOSH-ANDERSON-KELLAM FUNERAL HOME LTD. 152 King St. E., Oshawa (905-433-5558) directed to Crohn’s and Colitis Canada (crohnsandcolitis.ca), the Acute Care for the Elderly (ACE) Unit at the Queensway-Carleton Hospital (Ottawa) or the Elizabeth Bruyère Hospital (Ottawa).