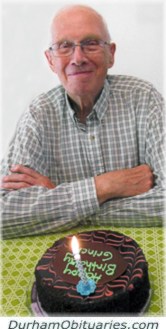 He was born in Bowmanville, Ontario on September 7, 1923.

He is predeceased by his parents, Rhoda and William, as well as his brother, Robert.

He married Joan (nee Dobos) Lambourne (deceased) in 1948 and cherished her for almost 58 years.

He enjoyed working as a stationary engineer, but also enjoyed gardening, woodworking, crosswords and music.

Grandchildren James Gordon (Andrea), Christopher Gordon (Joanne) and Samantha Chapman will miss his fun loving manner. Also, he will be missed by his Great Grandchildren: Gavin, Grace, Alexander and Jamie.

Mark is remembered by his loving in-laws: Alex Dobos Sr. (Julie deceased), John and Kay (nee Dobos) Planeta, and Les and Angela Dobos. He will also be remembered by numerous nieces, nephews, family and friends. Thanks to PSW’s Judy, Brenda and Paula, as well as, Dr. Fitzpatrick and staff.

Also, profound thanks to the exceptional staff at Cardiac Care Lakeridge Oshawa for their compassionate support. Visitation will be held at OSHAWA FUNERAL HOME, 847King Street West (905-721-1234) on Friday, July 6, 2018 from 9:30 a.m. until time of Service in the Chapel at 11:00 a.m.

Memorial donations to the Settlement House Oshawa, War Amps Canada or CHARITY of choice would be appreciated.