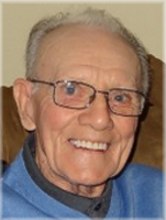 SHERIDAN, John - It is with great sadness that the family announces John’s passing on November 29, 2020 at Scarborough General Hospital.

John was born December 16, 1926 in Dumbarton, Scotland, UK, to Neil and Sarah Sheridan. He was a hard worker all his life starting in his childhood.

Many a time during the war, he would be up all night in the bomb shelter while his town was being bombed during the Battle of Britain.

This sense of dedication followed him all through his life. John was a very good student and he enjoyed school.

His wish was to continue on to University, but he chose to become a tool and dye apprentice instead to assist his family.

He met his loving wife Joan in Scotland. They married and started a family. Seeking more solid work, John emigrated to Canada. He found a job, established a home and his family followed soon after. John was employed by Adams Brands, Warner Lambert in Scarborough, as a millwright. He worked there until his retirement at 65 years of age.

John will be sadly missed by all who knew him.  He always had a smile, and would do anything he could to assist  someone in need.  He had a wonderful sense of humour and was a great story teller.

John was predeceased by his loving wife Joan, his brother Sonny, and his sisters Cathy and Jenny.

He leaves behind his children John (Cathy), Margaret, Elizabeth (Lincoln), and Joanne (Steven). His grandchildren, Andy (Andrea), Mike, Chris (Erin), Jordan (Alyssa), and Dylan. He was a proud Great Grandpa to his beloved “wee rascals” Ethan, Liam, and Kyle.

Private family service will be held on Friday, December 4, 2020.

No flowers please.  If you wish, donations to Happily Ever Esther Farm Sanctuary in John’s memory would be greatly appreciated.

Due to COVID restrictions, the visitation and funeral services will be held privately by invitation only. While the family wishes you could all be with them in their time of loss, they appreciate your kind words and condolences.