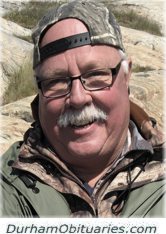 Known to many in Ontario and Newfoundland.

Roly spent a successful career of nearly 40 years in Chiropractic in Clarenville, Nfld.

In his personal life, Roly enjoyed hunting, fishing and the outdoors, flying his airplane, family history and traveling to many parts of the world but most important were his wife and children. Their success and happiness was paramount to all that he did.

Roly is survived by his wife Rowena of 39 years and his children Meghann, Sara and Ian. Survived by his parents William and Jean, brothers and sisters Jerry (Debbie), Jeanie Wilkinson (Wayne), Don (Colleen), Bonnie Martin and Jim (Suzanne). He will be missed by numerous aunts and uncles, nieces and nephews and many friends and colleagues.

All are welcome to celebrate Roly’s life and remember his laughter and joviality.

Donations can be made to the “Discovery Health Care Foundation” at Dr. G.B. Cross Memorial Hospital, Clarenville, Nfld. to support families of patients in Critical and Palliative Care in memory of Dr. Roland G. (Roly) Bryans.