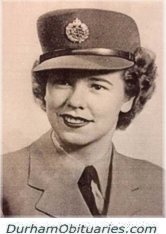 Hazel is pre-deceased by her husband Fred Ashton, her daughter Jo-Anne, her three brothers and one sister.

Hazel served in the RCAF as a wireless operator, attended Kingsview United Church and was a member of the Oshawa Senior Citizen Centre (OSCC).

Hazel will be sadly missed by Jo-Anne’s family as well as her children Brian, Philip, Jeffrey, Andrea, Steven, Patricia and their families.

In lieu of flowers, donations to the OSCC, Fairview Lodge or a CHARITY of your choice would be appreciated.