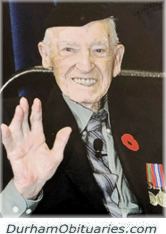 Wils moved to Oshawa in 1929, and met his Dear Bride in Stirling, Scotland while serving overseas with the Queens Own Rifles during WWII.

He returned to Oshawa after being discharged from the army, and in 1971 partnered in the firm Dehart & Stauffer Insurance Brokers, until his retirement.

An avid sports enthusiast, he played hockey until his enlistment, and then coached minor league baseball, and refereed minor hockey, spending many a Saturday morning at Children’s Arena. He took up golf in his early 30’s and it became his passion.

He was to be found on the links on most summer days, for most of his years at the Oshawa Golf & Curling Club, accumulating a total of 11 Hole-in-ones.

He will be remembered mostly for his quick wit and humour, and his common answer when asked how he played today: “Three Hours and Forty Minutes.” You only got a time, never a score.

He lived by the motto: For when the one great scorer comes to mark against your name, He writes-- not that you won or lost-- but how you played the game.