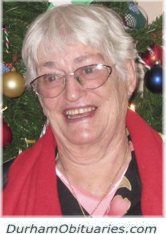 Passed away with family at her side, Thursday, December 13th, 2018, at Joseph Brant Hospital in Burlington at the age of 89.

Beloved wife of the late Dr. Nicholas Ostafichuk (1989) and beloved partner of the late John Patterson (2009);

Janet will be missed by all.

Janet/Ivanka's family will receive family and friends at OSHAWA FUNERAL HOME, 847 King Street West (905-721-1234) on Friday December 21st from 2 – 4 PM (Reception at this time) and from 6 – 8 PM in the chapel with Panachyda memorial service.

In lieu of flowers, donations in memory of Janet Ivanka Ostafichuk can be made to Heroes Companion Rehabilitation Project http://heroscompanion.org/index.php/donate/ and/or Friends of Ukraine Defense Force. FUDF: http://www.lucorg.com/block.php/block_id/63.