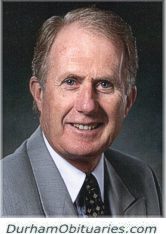 Passed away on Friday February 1st, 2019 at Hillsdale Estates.

Frank was in his 79th year.

Predeceased by his brother Ken, sister Arlene McDonald and his parents Frank & Anne Connors. Frank was in transportation for 58 years, he began in sales then started his own business which led to him representing two companies in the United States.

Later Frank and a partner opened York Transport, which continues on today as an international transportation company. Frank enjoyed his time as Sports Chairman and Hockey Coach at Woodview Park.

Frank was proud to have served as Chairman of The Ontario Truck Associationand member of the Toronto Truck Association.In 2000 Frank was diagnosed with Alzheimer Disease and the family began the difficult journey through the illness.

A celebration of Frank’s Life will be held on Saturday April 6th, 2019 at the Oshawa Golf & Curling Club, 160 Alexandra Street, from 2pm to 5pm.

Memorial donations to the Alzheimer Society of Durham Region would be appreciated by the family.