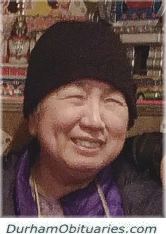 On February 21st, 2019, Eglantine Silva Montenegro-Gomez (aka Eggie or Baby) passed away peacefully in her sleep at home in Whitby, Ontario after a two-and-a-half year battle with cancer.

She fought hard and sometimes dirtily (she even tried going vegan), but unfortunately it wasn't enough.

Through it all, she showed courage, strength and, when she smiled, dimples as deep as her love of lechon (Filipino roast pork).

Eglantine's journey to Whitby started in the Philippines, where she grew up in the province of Batangas just outside of Manila.

She earned her accounting degree from Assumption College, then went on to work at Banco Filipino. She moved to North America, working at several companies before she retired at IBM.

Following her career, Eglantine was worried she wouldn't have anything to do. Luckily she was able to spend more time on her creative pursuits like knitting, woodcarving and painting. A traditional accountant she wasn't.

A devout Catholic for her entire life and part of the Holy Family community for over a decade, she joins her father Serafin, mother Lydia and brother Arnulfo in Heaven.

She is survived by her husband of 41 years Jaime (aka Jim) and her son Juan (with Sabrina), as well as brothers Serafin (with Nora) and Edgardo (with Mila). She showed them what it means to love and sacrifice for family, something they will remember and a standard they can only hope to match.

A memorial and celebration of life will be held at Holy Family Catholic Church on March 2nd at 10:30 am, followed by an internment of her ashes at Resurrection Catholic Cemetery.

There will be a reception at the family home with food, music and stories about Eglantine. Karaoke is unconfirmed, but she was Filipina.

Please let either Jaime or Juan know if you are planning on attending the reception.