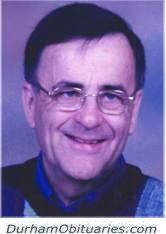 Born on September 7th 1945 in Halifax, Nova Scotia, Rowley graduated from Dalhousie University with a Bachelor of Commerce in 1967.

He had a successful career in finance with several Canadian corporations.

A lifelong sports fan, he was an enthusiastic softball player and golfer.

Rowley is survived by his wife of 51 years, Barbara (née Kimber) and his sons; David (Diana) and James (Shannon). Deeply loved Grandad to Jackson and Sophia and Lolo to Zoe and Hunter. He is also survived by his sister Charlotte Ferguson as well as his nieces and nephews, a large extended family and many good friends.

His family would like to extend their sincere thanks to the staff at the Ajax-Pickering Hospital’s ICU for their wonderful care.

A visitation will be held at St. Mark’s United Church, 201 Centre Street South, Whitby on Thursday, June 6th 2019 from 12pm – 1pm followed immediately by a memorial service beginning at 1pm.

If desired, donations in Rowland’s memory may be made to St. Mark’s United Church and condolences may be expressed online at  wctownfuneralchapel.com.