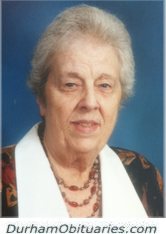 Marjorie was a devoted and loving mother to her daughters Christine (who pre-deceased her in 2018) and Pauline (Doug).

Cherished wife of Edward Charles Thomas White who pre-deceased her in 1989. Beloved and loving grandmother of Wayne (who pre-deceased her in 2007) Wendy (Simon), Jason (Elizabeth) and great grandmother to Michael, Brandon, Brett, Jacob and Zachary. She was predeceased by her parents Rose and Alfred and by her beloved sisters Peg, Lily and brother Sid. Marjorie was very connected to her English family.

Before coming to Canada in 1957, Marjorie served in the WAF as a radar/enemy plane spotter off the coast of England.

She met her husband Ted when they were both air raid wardens.

During the Blitz they patrolled the streets of London ensuring black-out curtains were drawn directing people to the safety of the air raid shelters. After her service she married and started her family. She and Ted came to Canada in 1956 with their two young daughters, settling in North York.

Marjorie had a varied and successful career at the city of North York in the Water Revenue Department retiring after 30 years of service.

Marjorie had many diverse interests. She was an avid knitter, scrabble player and crossword enthusiast.

She was a great reader and loved to follow the political scene. During her younger years she was a great walker preferring to do so over public transportation.

Marjorie had special place in her heart for Kristen and Bruce and for those who also supported her during her later years.

A special thank you to Barb, Susan, Maria, Muriel & Sparky. Thanks to nurse Jenn, Sheena and Amy. She could not have continued to live independently without Doug's ongoing support. We are grateful.

Memorial donations to the Heart & Stroke Foundation would be appreciated.

Online condolences can be made at  courticefuneralchapel.com.