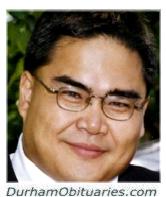 It is with great sadness that the family of Joel Benedito Razo announce his unexpected passing on July 27, 2019 in his home in Ajax, ON at the age of 48.

Joel will be missed by his parents, Joe and Dida (Benedito) Razo of Ajax, ON, his sisters, Charlene (Kurt) Allen of Corunna, ON and Catherine (Galen) Watson of Whitby, ON, and by his nieces Emma, Cayleigh, and Paige and nephew, Grayson who they lovingly called “ToJo”.

Joel was also loved by his many and aunts, uncles and cousins in the Durham Region, the United States, and the Philippines. Joel was born in Manila, Philippines and moved to Canada at three months of age.  Although Canada was his home, he enjoyed going back to visit the Philippines throughout his life.  He loved to be surrounded by his nieces and nephew, treating them like his very own children.

Joel would often be found on FaceTime talking to them and making them laugh.  He loved to spoil them with trips to the park and treats from McDonalds.  Joel would never miss any family gathering.  He was his happiest when he was surrounded by all his siblings, aunts, uncles and cousins.  Joel was an avid football and basketball fan.  He was even part of his high school football team.  Joel was always cheering on his favorite teams—The Patriots and Michigan Wolverines.

Visitation and funeral service will be held at MOUNT LAWN FUNERAL HOME arrangements to be confirmed. Burial will take place at Resurrection Cemetery.

In lieu of flowers, donations will be accepted by the family and will be donated to the Canadian Mental Health Association and/or The Heart and Stroke Foundation.