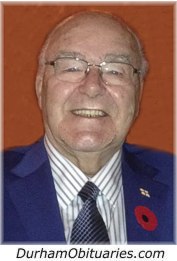 Tom passed peacefully in his 87th year with his family by his side, on January 4, 2020.

Paula was particularly instrumental in helping to ensure that Ellis’s final months were as comfortable as possible.

Also survived by his grandchildren, Michael (Janet) and Susan (Jordon) and much loved grandson-in-law Mark.

Loved by nieces, Lorraine, Pauline and Melanie and nephews, Iori and John.

Ellison grew up in the beginning of World War II in England, he served with the British Royal Navy, earned an apprenticeship as a machine tool fitter, worked with George Kents Marine Engineering, Vauxhall Motors, he emigrated to Canada in 1965 and worked with General Motors for 29 years until retirement in 1994.

Ellison was a perfectionist in much of his daily efforts, he was a gentle and very kind man only wanting the best for his family and friends. While he may not have acknowledged it himself, he was highly respected by all who came to know him.

Donations (if desired) in his memory (and in lieu of flowers), to The Diabetes Association of Canada or the Canadian Society for Prevention of Cruelty to Animals.