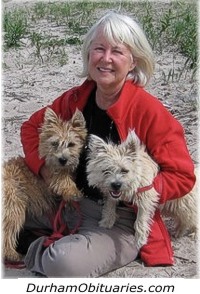 Died peacefully at Markham Stouffville Hospital with her daughter by her side, after a courageous journey with dementia.

Predeceased by her first husband and father of her three children, Robert Andrew Dods.

Predeceased only two months prior by her partner, Jonathon Shore.

Elizabeth graduated from the Toronto Western Hospital, School of Nursing in 1959. After raising a family, she went on to complete a Bachelor of Arts Degree in English Literature at York University, graduating in 1976. She subsequently studied at the Ontario College of Art, producing a broad range of two-dimensional art forms that hung prominently in her home. She was the founder and co-founder of three businesses in the Healthcare sector.

Elizabeth devoted many of her later years into research on her family genealogy, and she was an early adopter of computer programs to transcribe historical church records dating back to the 1840s.

Elizabeth was the pillar of the Dods family, hosting endless memorable meals and parties at her home on Wasaga Beach. She was a gifted cook and baker. She was immensely proud of her three children. She adored her five grandchildren, spoiling them with her attention and culinary talents. Her partner Jonathon provided many years of love and support to her, allowing her to remain at home as long as possible.

Due to the uncertain circumstances, a Celebration of Elizabeth’s Life will be held at a later date.

In memoriam, donations may be made to the Alzheimer Society of Canada.

Condolences may be expressed at wctownfuneralchapel.com.