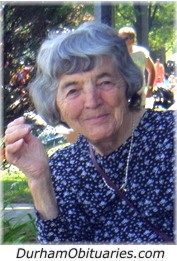 It is with great sadness that we acknowledge the passing of Paulina Stek (nee Dolinska), age 96, on Monday April 13, 2020.

She passed away peacefully in her own home.

She was born in the Ukrainian village of Tomashivchi on April 18, 1924 where she enjoyed a happy childhood.

In her mid twenties Paulina moved to Rochdale, England where she ultimately met and married Mykola Stek.

Together, they were quite active in Rochdale’s Ukrainian community.

In 1960 the family (which now included daughter, Olga) moved to Montreal, then Toronto and later Oshawa, where the family would reside for some time as Mykola was hired by General Motors.

In Oshawa, Paulina enjoyed tending to her garden. She also enjoyed making her own tomato sauce, borscht, cabbage soup and pickles which the family greatly appreciated. She was especially known for her delicious honey cake, made with honey collected from her husband’s bee hives.

Paulina was an active participant in perogi making sessions at Lviv Ukrainian Hall. She was also involved in the Oshawa Ukrainian community and attended many church and cultural functions. Paulina also took great pride in keeping a nice home and caring for her family.

She is predeceased by her sister Stephanie, brother Peter, and husband Mykola. Paulina still has many nieces and nephews residing in Ukraine.

Paulina was a doting grandmother to her grandson, Adam. They spent many sunny afternoons in her garden throughout the summer. Adam affectionately called his grandmother Baba, which always made her smile. In her very senior years she became a great grandmother to Adalyn who recently celebrated her first birthday.

As Paulina’s health slowly declined she was cared for at home by compassionate and kind caregivers from The Nurse Next Door. As well, several neighbours, namely Zenia and Bohdan Kolach, and Leonard, Laura and Dana Judd were invaluable in providing exemplary care for Paulina, enabling her to remain in her own home during her elder years.

Paulina is survived by her daughter, Olga, her son-in-law Larry, her grandson Adam, her grand daughter –in –law Jackie and her great grand daughter Adalyn. She will fondly be remembered as a loving and giving member of our family.

In lieu of flowers the family would prefer donations to be made to the Alzheimer Society of Ontario https://alzheimer.ca/en/on

For online condolences and to share stories with the family please visit armstrongfh.ca.