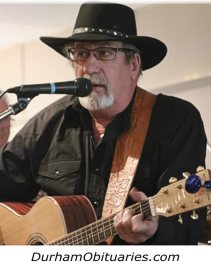 McGILL FORTNUM, Wayne Robert McGill Fortnum  -  61, passed away suddenly in the early morning hours of Monday April 27, 2020 at his home in Bowmanville, Ontario.

He grew up in London along with his siblings Kelly (Huis), Kevin, Linda (1961 - 2003) and Darren where his love of racing, cars and music blossomed.

Wayne had recently retired from General Motors after 25+ years of hard work - shifting his focus to music, travel and love.

He is survived by his daughter Anne, as well as his sons Alex and Travis.

His grandchildren Jessica, Jamison, Jeffrey and Julienne. His nieces and nephews, and other family and friends.

Messages of Condolences may be sent to This email address is being protected from spambots. You need JavaScript enabled to view it. .