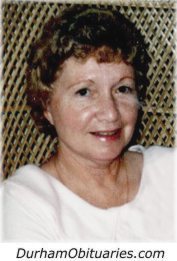 It is with profound sadness that the family of Lorna Mary Devenyi announces her passing in the early hours of Sunday, July 5, 2020.

Lorna passed peacefully and comfortably with family at her side.

They had 2 children and were expecting a third, when in December 1958, a plane crash took the life of Reg while on duty with the RCAF. Lorna was left a widow with 3 small children.

In 1965, Lorna met Ernie Devenyi who was also a widower with 2 small children and in 1966 they married. In 1967, they had one more child to complete their family. Lorna and Ernie remained together until the end of Lorna’s life.

Ernie was Lorna’s rock and dedicated caregiver for many years at the end of her life. She was very grateful and appreciative of the love and care he bestowed on her for her whole married life.

Lorna worked in the television and radio industry for many years, both in Halifax and Toronto. She was an extremely hard worker and worked outside the home in addition to raising 6 kids.

She will also be sadly missed by her 9 grandchildren Adam, Korri, Tyler, Eric, Stephen, Krista, Rachael, Mitchell, and Emma. Lorna also recently became a Great Grandmother to Brooke and James.

Lorna leaves many nieces and nephews and life-long friends.

A very sincere thank you to Susan for her post hospital care and support on a daily basis. Your support of Dad will never be forgotten. Thank you to Tammy from the family.

To our family medical team, Brian and Jacquie for their unequivocal, loving support and gentle handling of Lorna’s departure.

You made it the best departure that it could be.

Lorna will be cremated and funeral arrangements within the current health situation are being made.

A celebration of Lorna’s life will be held at a later date to be advised.

Memorial donations to Lakeridge Health Foundation would be greatly appreciated.