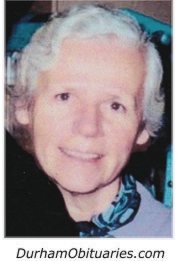 June died peacefully at her home in Whitby, on Monday, July 20, 2020 at the age of 83 years, following several months of declining health.

Her loving husband Ed was by her side.

June was the proud and loving mother of Mark (Laurie) of Toronto, and beloved grandmother to Hayden.

She will be sadly missed by her sister Joy Black (Clarence) and her brother Ken Cottrill (Esther).

Born and raised as part of a loving family with 8 children in North Bay, June briefly worked at Bell Telephone in North Bay, and EMCO in London, Ontario.

Her life took an abrupt turn when her older sisters Joy and Jean, along with her mother, introduced her to the Gospel Hall.

June met Ed for the first time at Union Station in Toronto, on her way from London to visit her family in North Bay on December 24, 1963. They fell in love and were married on March 12, 1965.

June and Ed moved to Ottawa shortly after that, and Mark was born in 1970. They subsequently lived in Windsor, Bracebridge, and Oshawa before finally settling down in Whitby.

A devoted wife, mother and grandmother, June was also an avid knitter and loved taking care of children, especially newborns.

She will be missed by her family and friends.

There will be a private family service in the BARNES MEMORIAL FUNERAL HOME Chapel on Saturday, July 25 at 11am. Interment to follow in Whitevale Cemetery.

If desired and in lieu of flowers donations to Alzheimer Society of Toronto  will be gratefully acknowledged as expressions of sympathy.