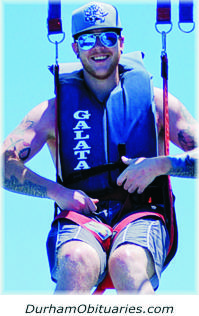 It is with great sadness that the family of Rusty Corringham announces his passing at the age of 31 on Friday, December 11, 2020 in Hamilton, Ontario.

Rusty has moved on to rest with his Papa (Bruce), Uncle Dave and Aunt Diane.

Born on January 11, 1989 in Toronto, Ontario, he grew up in Scarborough and Innisfil then went on to live most of his adult life in Hamilton.

An avid sports fan, cheering for the Leafs and the Tiger Cats, Rusty also loved music, particularly rap, which made him reflect on society and his place in it.

After completing a diploma in Electrical Engineering and a certificate to become a child and youth worker, his passion for cooking lead him to build a career as a chef.

Rusty was a quiet man with a very big heart – especially when it came to underprivileged children.

The time he spent as a councillor with the Boys and Girls Clubs of Canada and the Tim Hortons Camp was deeply rewarding.

Condolences may be offered at mountpleasantgroup.com .