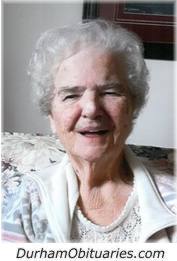 Peacefully on Thursday January 21, 2021 at Lakeridge Health Oshawa in her 87th year.

Daughter of the late Alfred and Emma Whitlock.

Cherished aunt to three generations of nieces and nephews.

Doreen will be deeply missed and fondly remembered by her family and friends.

Memorial donations to the Alzheimer Society would be greatly appreciated by Doreen’s family.