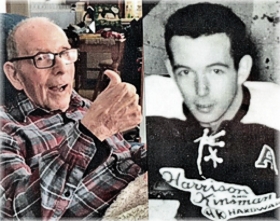 Of Oshawa passed away at Lakeridge Health Whitby on Wednesday, Oct. 13, 2021.

Don is predeceased by his wife Marilyn (1991) and is survived by his daughter Donna (Dave Sheridan) and son Brian (Jennifer Legree).

He was the proud grandfather of Brandon and Tania Sheridan (and great-grandfather to Noah and Summer); Chris and Ashleigh Sheridan and Allison Legree and Davis Legree.

He spent his formative years in Calabogie, Ont., weekends as an altar boy and weekdays attending, and occasionally skipping - school.

This led to his ultimate move to Oshawa at age 16 where he embarked on a 43.5 year career at General Motors, half of that time spent in Material Control.

Don’s life revolved around family, sports and community service - and the music of Stompin’ Tom Connors, accompanied by a Labatt’s IPA. He was committed to family activity at rinks, ball diamonds and cottages – often accompanied by his trusty cooler.

His athletic involvement included playing UAW hockey and fastball, along with baseball and slo-pitch; coaching and managing and serving as an executive member in the Oshawa Little NHL, most notably more than two decades with the Dines Restaurant Red Wings peewee team.

The Oshawa Minor Hockey Association made him a lifetime member and named a trophy in his honour.

He also was a long-time member of the Oshawa Sports Hall of Fame Selection Committee and volunteer at the hall during Oshawa Generals’ games.

Don was a frequent visitor to antique car shows throughout Durham Region in his 1964 Chevrolet Impala convertible.

His coffee conversations with Doug Skinner were weekly favourites. The family would like to acknowledge the selfless contributions made by Gladys Sundstrom, Kay and Jack King to ensure dad was healthy, happy and loved in his final years.

We also want to thank dad’s PSWs and Durham Region EMS for their support, and Lakeridge Health, especially the staff of 4W Whitby, for ensuring dad’s last days ended with dignity.

Donations in Don’s memory can be made to Royal Canadian Legion Br. 43.

If you would like to reserve a spot to come to the visitation and service, please do so at the following link:  https://signup.com/go/jTxPkYL.