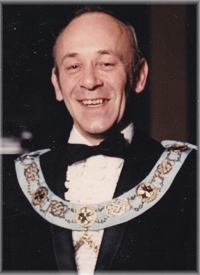 Gordon was born in Jedburgh Scotland and emigrated to Canada in 1967, where he met his beloved wife, Diane (née Dafoe).

Diane and Gordon were married for 52 years and had two children, Scott (Sandra) and Heather.

Following in his father's footsteps, Gordon was a member of the Masonic Lodge for 56 years.

He was a member of Lebanon Lodge A.F. and A.M. #139 Oshawa for 41 years and secretary for more than 25 years. In 1996 Gordon was proud to become a Grand Steward of the Grand Lodge of Canada.

A wider Celebration of Life and a Masonic service will be held for Gordon at a later date when restrictions allow.

Memorial donations to the Canadian Cancer Society or Muscular Dystrophy would be appreciated.