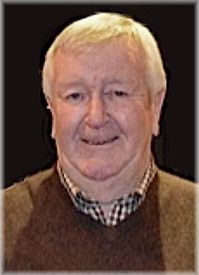 Born in Bellshill Scotland, Charlie was the youngest child of Charlie and Elizabeth McAlinden and brother to Betty Kelly.

Charlie married the love of his life, Rita, on October 29, 1966 and immigrated to Canada where he began his career with IBM/Celestica 1967-2003.

Charlie was an avid reader who enjoyed golf, his beloved Celtic F.C., Tommy Bahamas Hawaiian shirts and playing dominoes with friends at the Durham Celtic Club.

With his amazing quick wit and wonderful sense of humour he was a hilarious story teller. What Charlie cherished the most in life was his love of family.

He was a great husband, father, friend and mentor.

He will always remain in our hearts.

A small private family funeral will be held at OSHAWA FUNERAL HOME, 847 King Street West. A livestream of the service can be viewed on Thursday January 20 at 10:30 a.m. at the following link: https://funeraweb.tv/en/diffusions/44366

A celebration of Charlie’s life will be scheduled at a later date,