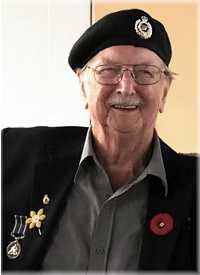 Frank Helps passed away peacefully and surrounded by his daughters on Thursday, August 4, 2022, at Lakeridge Health Oshawa in his 87th year.

Frank was born in Salford, England but lived most of his life in Oshawa.

He leaves behind his one sister in England; Audrey, and one sister and brother in Australia; Shelia and Ken.

Predeceased by his daughter Jayne, his brother Jeff and sisters Beryl and Betty.

Frank was admired and respected by everyone who knew him.

Frank embraced life with a positive attitude and an ability to laugh and have fun, even during difficult times.

He served in the Royal Core of Engineers in Her Majesty’s Armed Forces and was a proud Veteran. A Mechanical Engineer by trade he started his career working for the British Railway which took him and his family to Nyasaland, Africa for three years in the early 60’s.

Upon returning to England, he continued to work for the British Railway cementing his passion and love of trains. His desire to create the best life for his family led him to immigrate to Canada in June of 1967, arriving with only one suitcase and his bag of tools.

He quickly found employment and a place to live and sent for his family to join him in this new country we would all come to love and call home.

Frank eventually retired in 1999 from a successful career at Ontario Power Generation.

Frank loved his family, music, dancing, travelling, and shooting the breeze over a Kilkenny or two.  Many family dinners ended with a round of Drambuie and a toast to life … “L’chaim”.

He will be greatly missed by his family, but we know that “Sweet Caroline” is playing and he is once again dancing with his soulmate Kathleen.

His daughters would like to extend their sincere thanks to the staff and residents of Harmony Hills Retirement Community for welcoming him into their hearts and his final home.

They also thank the Doctors, Nurses, and Support Workers on the 8th floor – G wing for their compassion and caring during his final weeks.

In keeping with Frank’s wishes a private family viewing has occurred and will be followed by cremation and interment at a later date.

As an expression of sympathy, and in lieu of flowers, please consider a donation, in Frank’s honour, to the Royal Canadian Legion Oshawa Branch 43 or any charity of your choosing.